I have been a member of the International Society of Hypertension (ISH) since 2013. Soon after my enrolment in ISH I joined the New Investigator Network and, sometime later, its Mentorship initiative.

The goals of this great initiative, the establishment of a network of experienced researchers serving as mentors to younger investigators, seemed very interesting to me as I wanted to meet new researchers and possibly cooperate with more experienced colleagues. The mentorship system matches the mentees with available mentors based on their personal interests and research fields, aiming to match diverse individuals who would have mutual benefit from their association.

Picture below from left to right: Vanja Ivkovic and Yoshihiro Kokubo 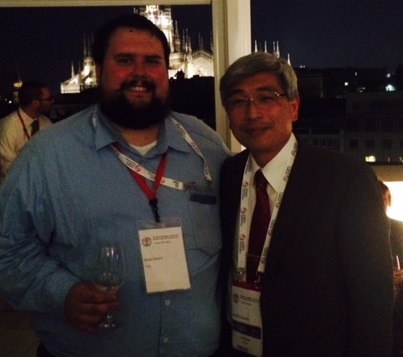 At that time I was doing my PhD and my focus was on the genetics of hypertension, so I was matched with Professor Yoshihiro Kokubo from the National Cerebral and Cardiovascular Center in Osaka, Japan. I thought then, and think now, that this was an excellent match because we were both interested in several fields: salt, traditional and emerging cardiovascular risk factors, polymorphisms and cardiovascular genetics, and designing and conducting large population-based studies.

Yoshihiro and I were in contact via email soon after the match and met each other at the superbly organized first mentorship event in Athens during the joint ESH/ISH symposium. The mentorship event was very successful and was the first time that our group of mentees got to meet their assigned mentors and also the people in charge of the New Investigators Network. It was a non-formal event where we got a chance to mingle with the other young researchers, drink some fine wine and make friendships and future collaborations.

Yoshihiro and I had first talks about some areas in which we and our departments could cooperate in the future. We stayed in touch regularly via email and exchanged some interesting ideas. The second mentorship event was an even bigger success story. Many mentees have had fruitful email conversations with their mentors in the past year and have now had another chance to discuss them in person.

Fadi Charchar and Maciej Tomaszewski (ISH New Investigator Committee members) selected Yoshihiro and me to present our mentorship experience and share some of our story with the other mentors and mentees. That was the first time we spoke in detail about some of our future plans, including the research proposal on which Yoshihiro will collaborate with our group; we submitted a research proposal dealing with the role of adiponectin and adiponectin gene polymorphisms in hypertension and cardiorenal risk for funding from the Croatian Society for Nephrology Development.

I am happy to say that we have now received funding and will soon use part of those funds to genotype our samples for two adiponectin gene polymorphisms. The proposal was backed by the New Investigator Network and will hopefully end with some interesting conclusions and papers. Soon, I plan to present Yoshihiro with a draft of the paper from my PhD, a population analysis of adiponectin polymorphisms genotype and allele distribution, which he offered to help me with the second time we spoke in Milan. I hope that this might be one of the first papers that will come as a result of the Mentorship initiative.

All in all, I must say that my experience with the mentorship initiative, the people behind the New Investigators Network and particularly with Yoshihiro were absolutely positive. I hope that this initiative will serve as fruitful ground for many future research collaborations, including the now third generation of mentor-mentee pairs. It is my wish that future mentees find excellent mentors and have great cooperation such as the one between Yoshihiro and me.

From left to right: Vanja Ivkovic and Yoshihiro Kokubo